I got a late start yesterday and except for Old Orchard Beach (which I have been to before but when in the area…) I really had nothing on my list of things to do.  The day started out completely sunny…it was supposed to be cloudy all day…and I was surprised when I got outside that it was very warm…60!  It was 35 when I woke up and it was supposed to be a high of 45 so I dressed accordingly since I would be at the beach. It did quickly cloud up and as seems to be typical for me these days as sunset approached it started sprinkling though never really rained.

Pleasant surprise to be able to walk the beach and enjoy it without being cold.  Old Orchard Beach is a typical beach town and difficult to find parking during the summer but this time of the year you can park pretty much wherever you want.  All of the amusements were closed but I was surprised to find that the Arcade was open as well as most of the restaurants in the pier area.

Confession…I went out to take pictures without a memory card!!!  All pictures taken at OOB were with my phone!  At least that was fully charged when I headed out for the day and I have a charger in my car!  Also fortunate that I found a store on my way out of town and was able to buy a memory card.  It’s not like that won’t be used again and I can add it to the collection I have in my back pack…you know, the one back home!!

It took a panoramic of the pier and beach…I really like the way it came out with the blue of the sky with the white and dark clouds. 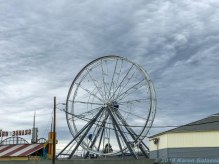 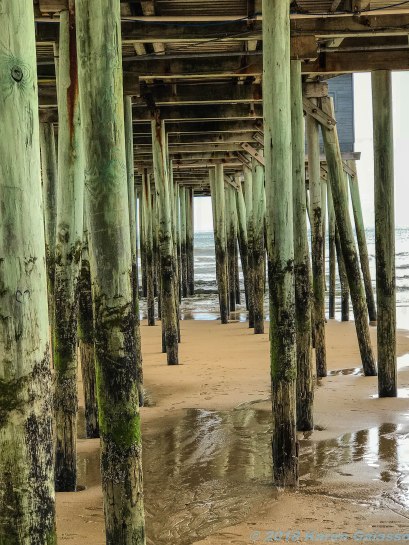 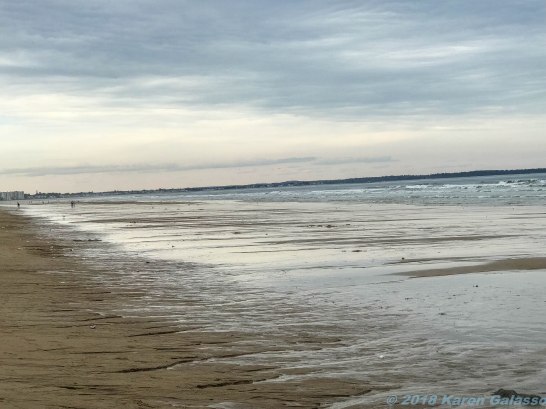 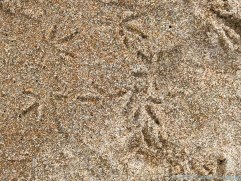 After leaving the beach I sat in the parking lot for a bit trying to figure out what to do next…I have been in the area so often I didn’t want to go some place I had already been to and I came upon a few things…one being Prout’s Neck Cliff Walk but the more I read reviews and comments the more I was convinced this was not for me.  Parking at the two entrances to the walk is non-existent and suggestions were to hike there from a set point but it was over a mile which would mean over a mile back.  I can walk and have walked 3-6 miles in a day but it is generally over the course of up to 8 hours…with many stops and resting in between.  Prout’s Neck Cliff Walk came off the list.  If you are in the area though you should check it out…Scarborough Beach ME!

A little more searching and I decided to go check out Fortune’s Rocks Beach in Biddeford.  I had never been here before…everything said to go to Mile Stretch Rd in Biddeford…nope…but I kept going when that road ended and I found it any way.  Before getting to the end of the road I saw water so I took a little side trip and found this lovely little area that almost looked like it was someone’s back yard…there was a small grassy area with a couple benches dedicated to people, a bell that used to be in the lighthouse, a small pier that went no where and way off in the distance…Wood Island Lighthouse.  This little area was called Vines Landing and it was beautiful.  It also had several different species of duck enjoying a late lunch/early dinner…I will post those pictures separately! The pictures here are Vines Landing and then Fortune’s Rocks Beach.  The white piece of equipment below with the green labels is a no named modern day lighthouse…hope it never comes to replace the beautiful lighthouses still in existence from the 1700’s, 1800’s, etc!  The picture of what appears to be a brown stone placed on top of a rock is actually a piece of petrified wood…it was very cool! 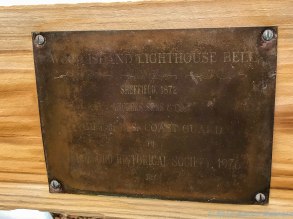 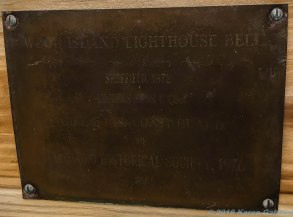 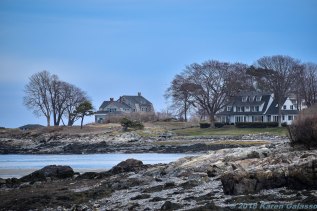 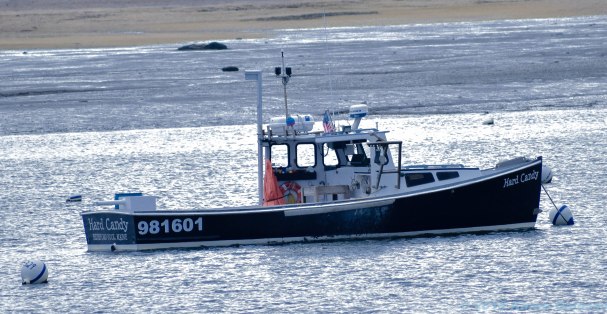 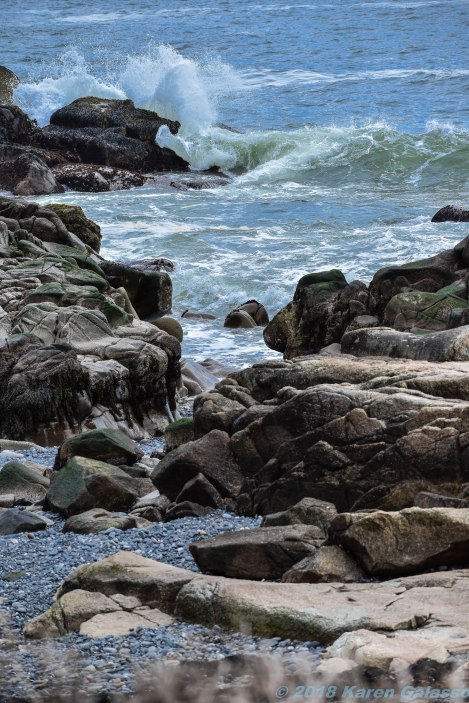 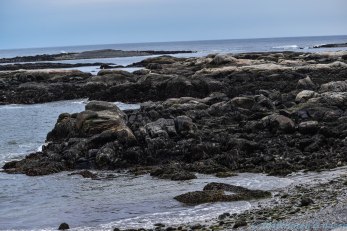 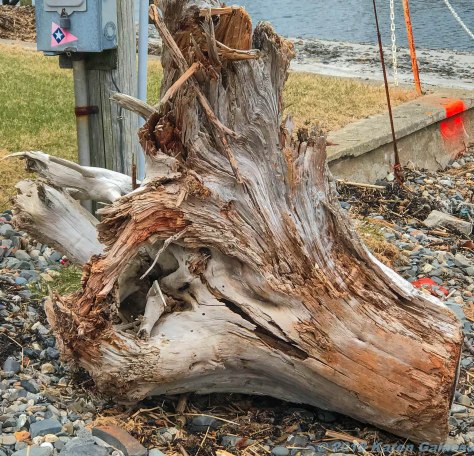 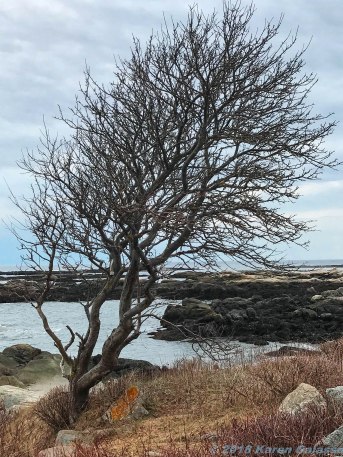 Back to the Birds of Vines Landing…not sure what is for dinner but it appears to be shrimp! 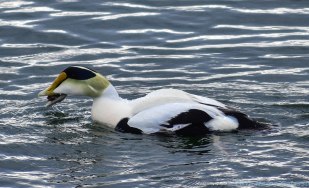 When I was driving away from Fortune’s Rocks Beach I could see an extremely large white building off in the distance…ever curious I had to go find out what it was…it was the Marie Joseph Spritual Center.  I took a few photos but was asked to leave the property after they determind I did not have a reservation.  There was a very small cemetary there when you first enter the grounds.  I took a picture of the main headstone and another of the smaller, seemingly older headstones but the picture of the older headstones came out black.  Hmmm!  Oh well… 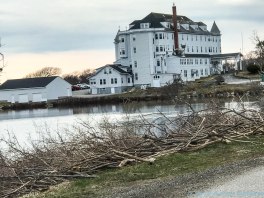 Though it was sprinkling a bit at this point I still wanted to check out where there might be a good place to catch sunset should things change in the sky…there was still a few hours to go and anything can happen in New England!

Everything I found for the Kennebunk area suggested primarily 4 places:  Cape Porpoise Pier off Pier Road, Spouting Rock which got ruled out for me because it said a long hike was required, St. Ann’s Episcopal Church but when I got there the gates were closed and there was no access…though there was a pullover before you get there so I did go back there as the afternoon progressed and Gooch’s Beach Jetty on Beach Ave…this was where I headed!  I initially parked towards the center of the beach because there were a lot of surfers in the water…in all the time I was there I only saw one person actually “ride a wave”…mostly all they did was “float and bob on a wave.”  I started walking toward the jetty and about half way there I decided to go back and get my car and park closer to the jetty…in case it started raining I didn’t want to risk getting my camera wet!  As soon as I got out of the car up by the jetty it started sprinkling again but I ventured out there anyway.  As I got toward it I saw a group of kids that had just started a fire and they were settling in…to cook hot dogs!  It did rain for about 5 minutes when I got back over to St Ann’s but I don’t think it was enough to put out their fire or deter their fun!

As I was walking toward the jetty there was a small cement pad with a bench, a compass and a placque dedicated to a local woman.  I got pictures so I could remember her too!

The large white building is The Colony hotel…in case you were curious.

I also made a quick stop at Parson’s Way but took so few pictures that I believe they are mixed in with these pictures. 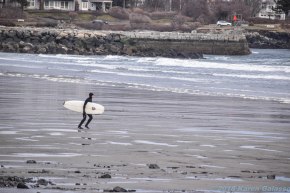 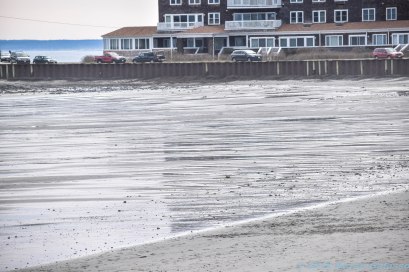 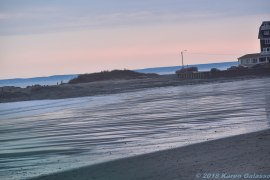 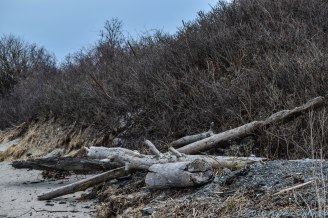 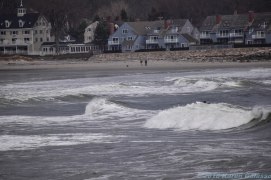 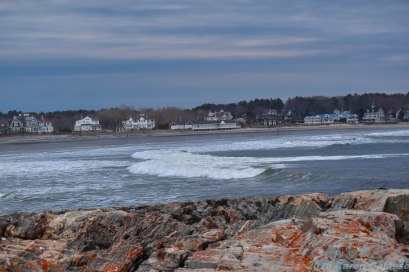 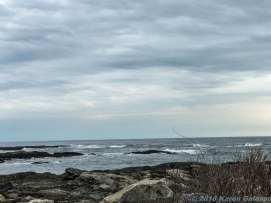 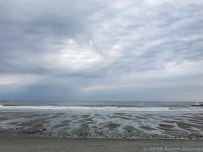 Moving on back to Ocean Ave and the turnout by St. Ann’s.  Though it sprinkled off/on until I left and rained for about 5 minutes, I did get some sunset shots! I took a picture of that white rock because something about it made me think of a piece of jewelry…like a Cleopatra necklace.  Don’t try to figure out my brain and how it works…I gave up a long time ago but it won’t stop me from sharing what my brain sees or thinks! 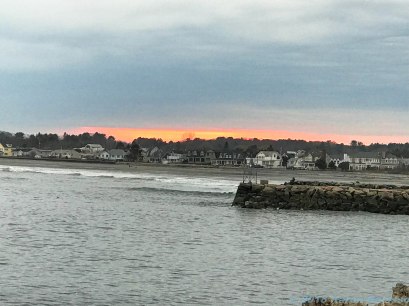 I will end this post with some random shots taken between Kennebunk, Saco and Biddeford…and likely a few areas in between!  The Citco sign was huge…not Boston Red Sox Citco sign cool/huge but still huge!  The first is a house under construction…probably just some little summer house…HA! Of course, you have to get the requisite church steeples, weathervanes, tower clocks…the Biddeford Pool Lobster Co/grocery market, a sea mural on the side of a building, bird house that says “Air Mail”…HA! A small, low flying plane…must be a small airport nearby but it looked like that plane was just inches above that sign! 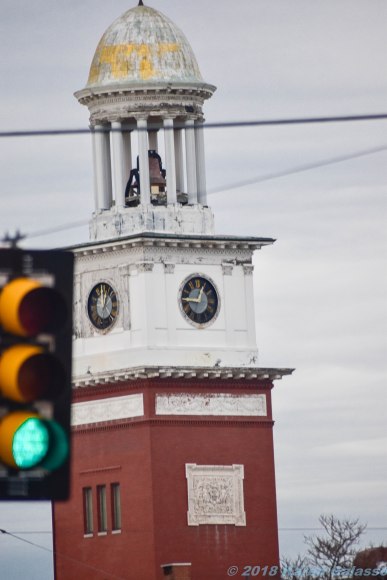 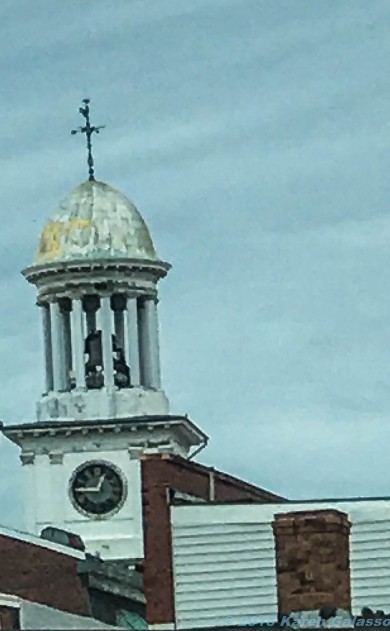 That is it for my Friday the 13th adventure!  🙂

Thanks once again for traveling with me!!

“Conventional wisdom tells us… we take our baggage with us. I’m not so sure. Travel, at its best, transforms us in ways that aren’t always apparent until we’re back home. Sometimes we do leave our baggage behind, or, even better, it’s misrouted to Cleveland and is never heard from again.”   -Eric Weiner